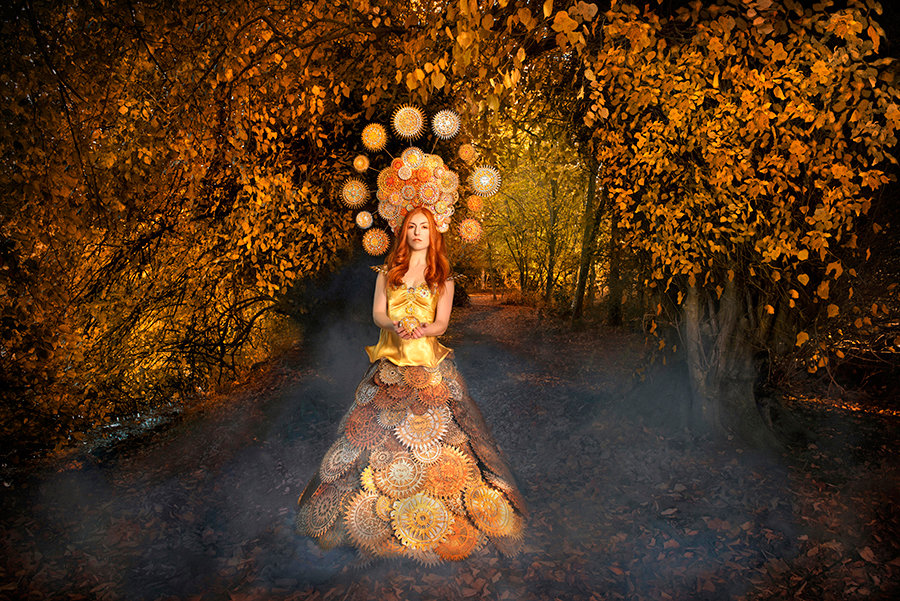 Fantasy Fashion....... Create your Destiny with the Gift of Time

Continuing the series of Fantasy Fashion on a Shoestring of character lead Fantasy concepts the Timeless shoot has to be my most ambitious yet. The outfit was created totally from scratch over a period of around nine months, with hours and hours of work; acquiring new skills as the concept developed. 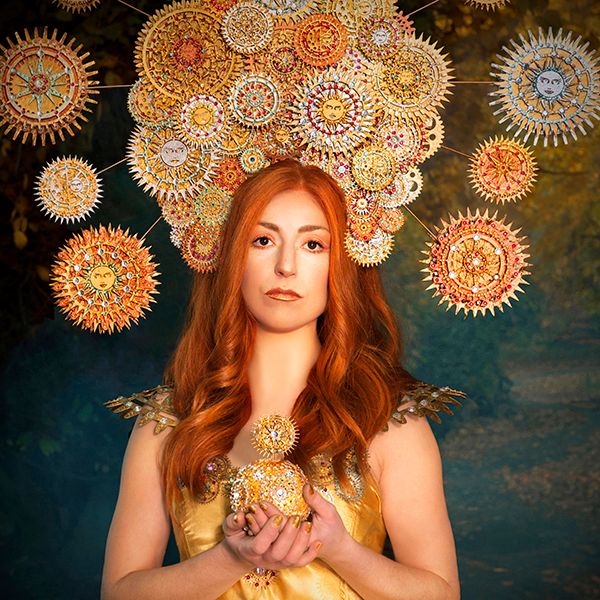 The initial seed of the concept derived from the idea of using cogs as a metaphor for the passing of time but not in the mechanical or industrial sense, rather depicting solar time symbolised by the Sun, Moon and Stars on both the headdress and dress signifying Day and Night, a celestial analogy for the passing of time. 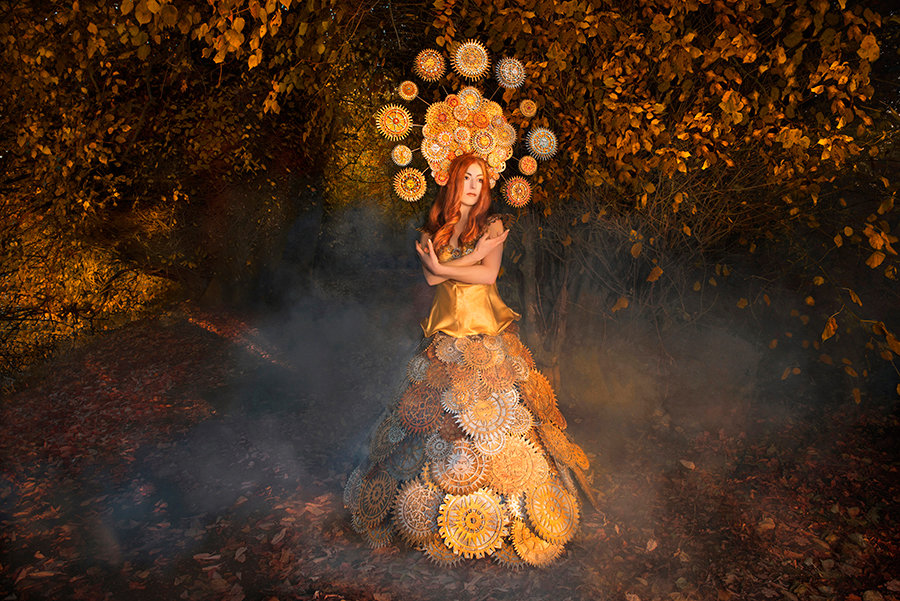 Fantasy Fashion .........Embraced by the Healing Hands of Time

The final narrative .... Portrayed by a timeless beauty she is the keeper of time but waits for no-one. Time is a precious gift, do not delay in fulfilling your dreams and create your own destiny. With time everything passes pain, hurt even love but the healing hands of time are there throughout the journey. 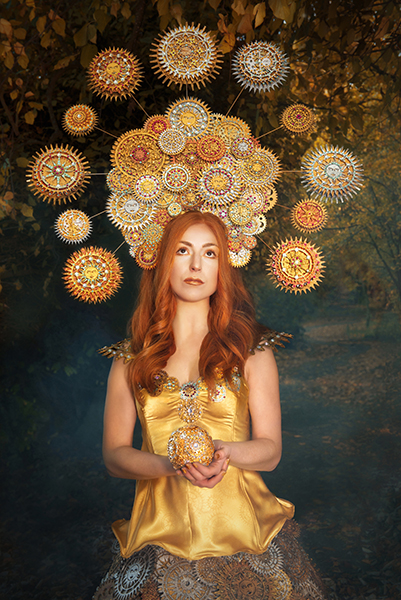 Fantasy Fashion .....The Wondrous Gift of Time is Precious

This concept offered its own unique challenges, although my vision of the costume and story were clear in what is represented however the location in which it was set was more ambiguous. Lots of location scouting ensued, my idea was an arch of golden leaves with a winding path representing the journey of time but the scouting was without success. 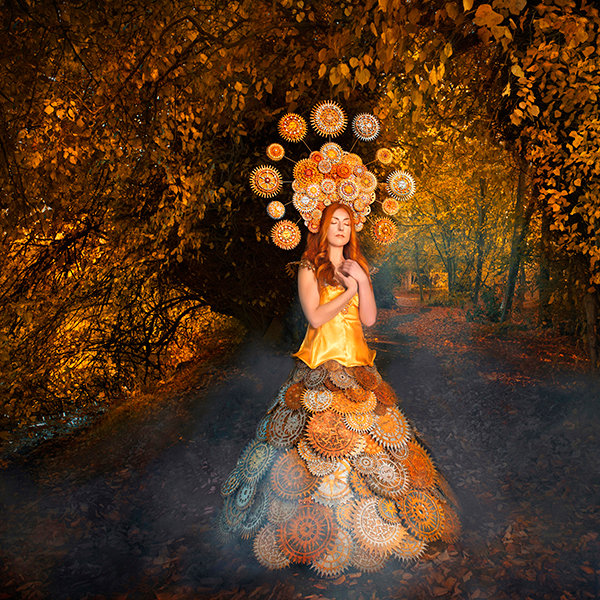 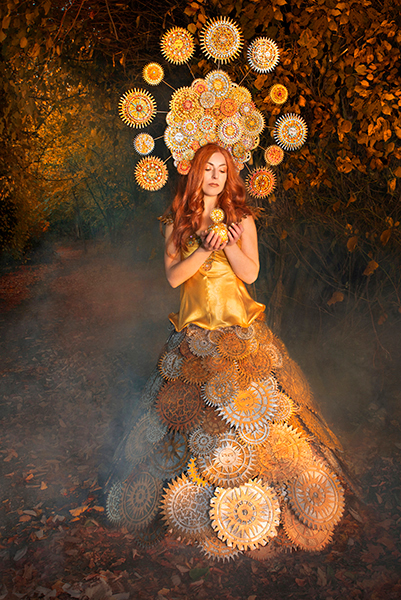 Fantasy Fashion ...The Keeper of Time but waits for no one

I decided to return to beautiful Bolam Lake where Forest Siren had been shot and thankfully the very location existed. However it was Summer so the decision was to wait until the leaves turned golden in colour to compliment the colour palate of the outfit 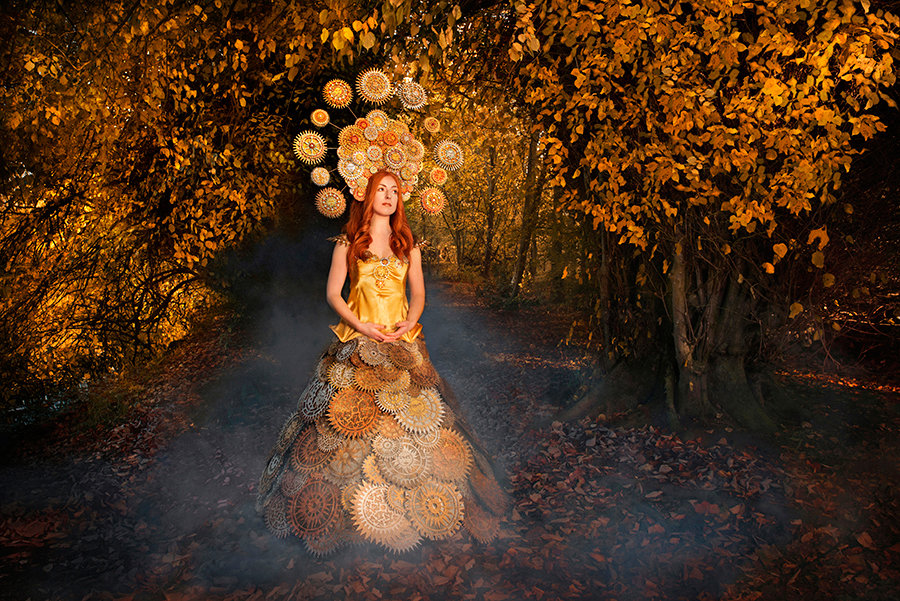 Fantasy Fashion......Cherish the passing of Time

Once again we are incredibly grateful to Graham Mitcheson and all his team from Morpeth Council in Northumberland for facilitating the Timeless shoot at beautiful Bolam Lake. Logistically this shoot was more challenging as it was set on a public pathway but after consultation consent was kindly given from Graham we were good to go. 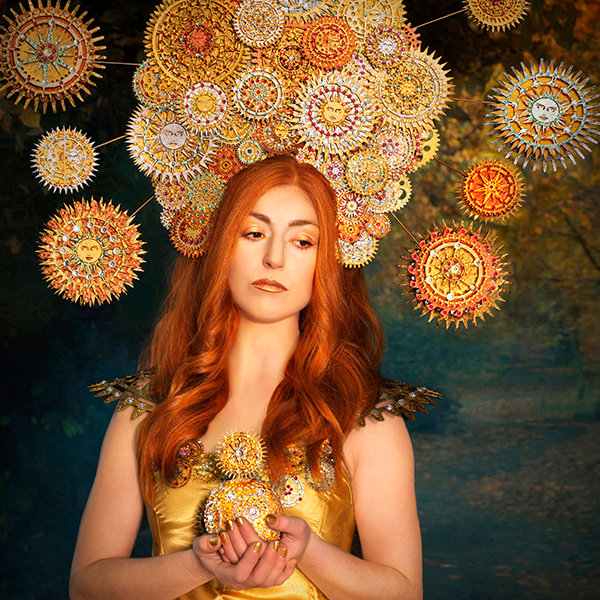 We waited and waited until all aspects of the shoot were aligned, the colours of the trees, the unpredictable weather, everyone’s availability etc however not everything corresponded. Time was literally running out so a compromise was agreed as the alternative was to wait until the following year. 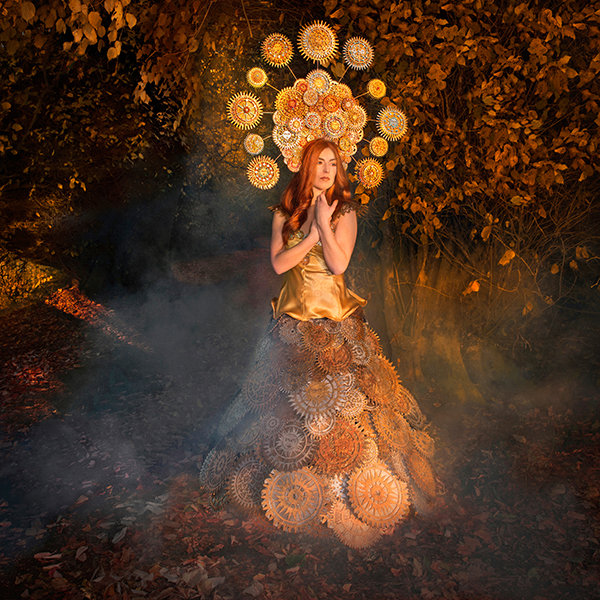 I took the decision to shoot even though we would only have a couple of hours of light on the day as we were unable to start until the middle of the afternoon and would probably run out of time which was actually the case.

Thank you so much to Arjun Nambiar at Nambiarts for this beautiful behind the scenes Timless video. 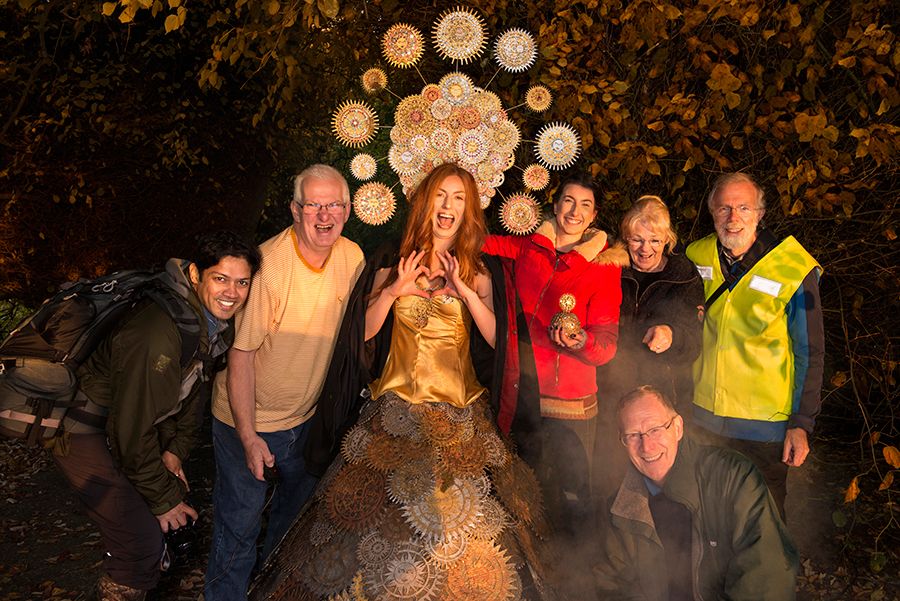 These shoots would not be realised without the invaluable support of all the wonderful people involved as without them my vision would never be fulfilled. A huge thank you to you all, Videographer Arjun Nambiar, first assistant Morgan Stephenson, Model Becky Medoza, MUA Lauren Storey, behind the scenes photography Lesley Hughes, assistants David Cottrell, Harry McAtominey and Sally Mendoza. They are all multi talented lovely people, some of whom are members of Gosforth Camera Club who are brilliant photographers in their own right but have supported me selflessly on my photography journey.

Amazing Lauren not only brilliant at her day job as MUA and beauty therapist but is also a dance instructor with boundless energy and stamina who goes way beyond the remit of an MUA of creating a beautiful look but also assists with all aspects of the shoot a great asset on any shoot.

As mentioned they are all multi talented people who carried out any task without question or complaint. Morgan is so much fun but is also an award winning Wildlife photographer together with teaching photography to special needs Children so has a very busy life. David is a talented creative photographer, President of Gosforth Camera Club and is also involved a 365 project, he has a cool head but he was after all an Eye Surgeon. Harry is a brilliant travel photographer which is no surprise as his career as an IT Consultant took him all over the world, he also has a wicked sense of humour.

Arjun and his drone weaved between us to create a beautiful video. We were granted special permission to use a mini drone as dones are known to agitate and unsettle the wildlife. Arjun produces beautiful landscape photography from amazing locations, a Videographer and is also a member of a 365 project. We are all amazed how he fits all this into each day as he is a Urology Surgeon..... how does he do it ! Lovely Lesley did a brilliant job of the BTS photography however she is also a gifted digital artist among various creative activities and is just the warmest person one of the qualities needed in her career as a teacher.

Becky our beautiful model is not only wonderful to shoot but is also a yoga instructor so is calm but strong and resilient in adverse conditions. This was of great benefit as the headdress and dress were heavy and restrictive but Becky persevered in the cold without complaint as always, what a star. It took a team of us including Sally, Lesley and Lauren to dress Becky in the ornate costume.

Morgan was in full smoke machine mode but we halted the shoot in 10 minute intervals to allow visitors to use the pathway which had been cordoned off by David and Harry at either end, with permission granted from Graham Mitcheson. The Visitors were very understanding with no complaints but were intrigued by what met them on their walk. Steve the Bolam Lake Ranger and also it transpired a good friend of Becky's family kindly returned periodically to facilitate all of our needs.

The first few shots went as planned but almost instantly the light was lost even with a high ISO and a much shallower DOF than I would have liked we just lost the light. The light was a completely different for the first few images with yellow golden leaf colour but what transpired for a very short period was beautiful dappled golden hour light which resulted in very vivid colours however in the end I think the golden orange light only added to the atmosphere and richness of the images. After much deliberation in post production regarding the final colour tone of the leaves I decided to embraced and accentuated the orange golden light in all the images to give a cohesive series of images. 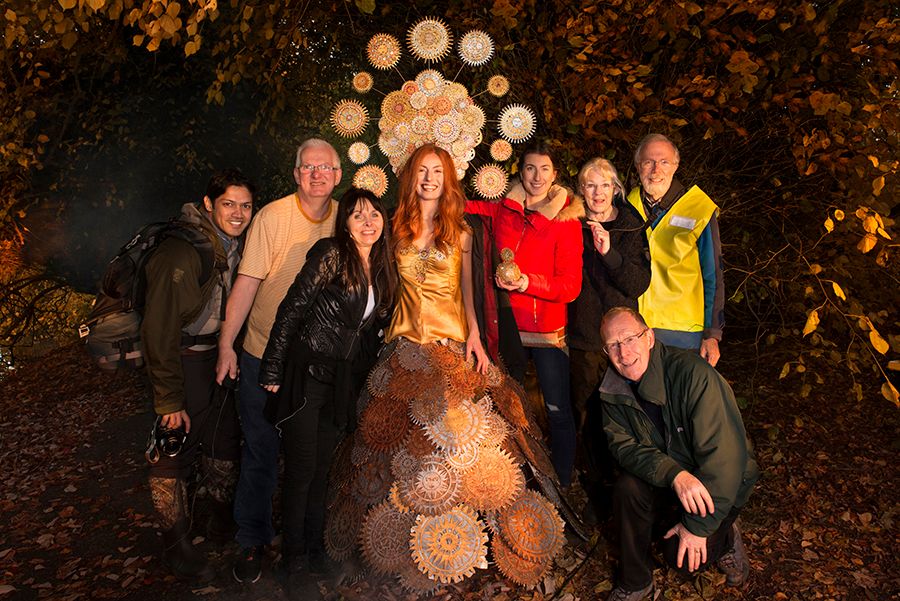 Again thank you to all you very talent people for making my vision a reality!

The making of the costume

Most of my concepts start life with either a sketch or a mock up in Photoshop as was the Timeless concept outlining my initial ideas. There were definitely new skills to master including a lesson in arc welding.

Continuing the shoe string budget challenge the skeleton base of the headdress was fashioned from old wire coat hangers. Initially it was thought that spot welding would be the easiest method however Kenny Hannard a plumber kindly gave me a lesson in arc welding but because of time restraints he did the bulk of the welding but it is something I really enjoyed and would definitely do again in the future.

I initially designed all the various cogs in Photoshop then my next new skill was to learn how to use Adobe illustrator in order to facilitate the designs being transferred to a laser cutter, thank you to Leo Underwood and Steve Baxter at NCC for their assistance with all the laser cutting. All the cogs were made from discarded cardboard curtsey of my local supermarket. I spoke to one of the Managers who was more than happy to supply me with a certain type of cardboard.

It was trial and error to achieve the various finishes I had envisaged, there were a number of techniques adopted including burning pva glue with a candle to achieve a distressed look before numerous layers of paints were applied, all metallic paint purchased from a value shop. This was extremely time consuming as each layer was dried over night however the whole project was incredibly rewarding.

The last stage of the cog making was to apply the embellishment, rhinestone in a limited colour pallet, numerous cogs were layered to form each individual cog. 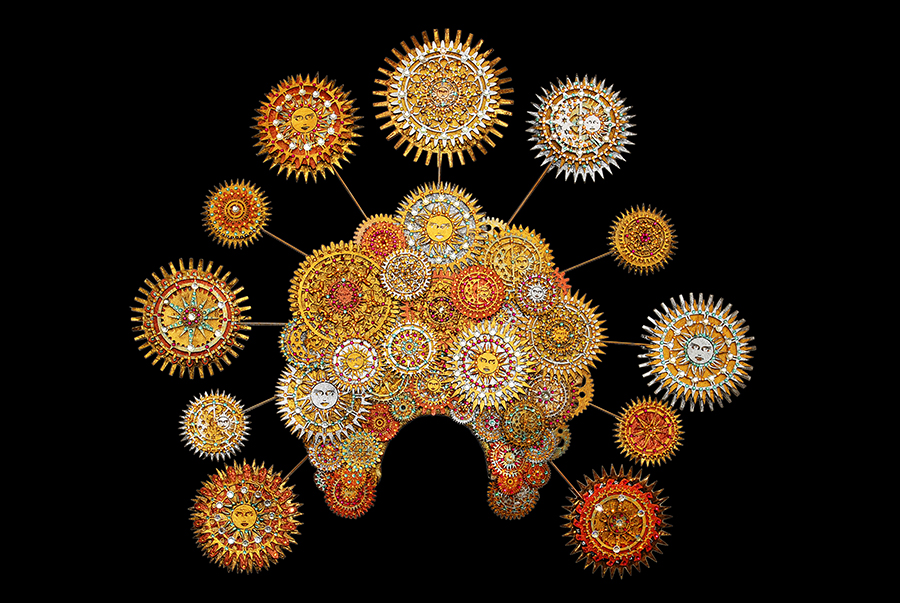 The bodice was created from a pair of gold satin trousers donated by my friend Harinder, the fabric was stamped with the same design cogs in gold paint.

I had previously been gifted a roll of wire from Kenny the plumber which was exactly was needed to create the hoop skirt for the bottom of the dress. The hoops were measured and crafted into the hoop skirt.

The cogs for the hoop dress were decorated slightly differently to the headdress but just as time consuming. The cogs were attached in a particular way enabling them to lie flat for transport. 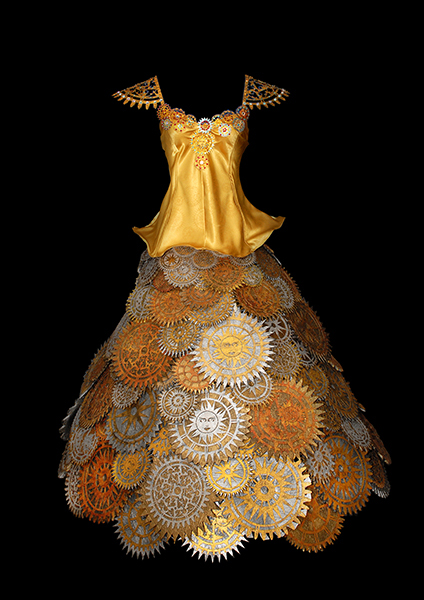 The Orb of Time

A symbol of time but not traditional or obvious such as a clock or hourglass was required so the Orb of Time was created which depicts the same design cogs as the headdress & dress crowned with a star cog.

Plaster’s scrim was moulded over a glass paperweight, allowed to dry then covered with polyfiller. When set days later the shell was cut from the paperweight mould then each half was filled with plaster of Paris and metal skewer allowed to set again for a few days.

Both halves were sealed together then adorned with cogs then painted gold and embellished.